Hemophilia A and therapies

Among all the bleeding disorders, hemophilia is widely known. It is also referred to as “the royal disease”, since the monarchs of the UK, Germany, Spain and Russia were affected in the 19th and 20th centuries. The first notorious carrier was Queen Victoria of the UK, who reigned from 1837 to 1901, and passed the Hemophilia B trait to her progeny1. Indeed, Hemophilia is an inherited X-linked genetic disease. Hence, females are generally healthy carriers, while the great majority of the affected population is male, with a worldwide incidence of 1 in 5000 males2.

The mutations on chromosome X that are causative of the disease were mapped either on F8 or F9 genes, both encoding for two essential factors of the coagulation cascade. Depending on the gene involved, the resulting disorder is classified as Hemophilia A or B respectively. As for hemophilia A (HA), various types of mutations have been described, ranging from gross gene rearrangements to insertions/deletions and single base substitutions. However, an inversion of intron 22 of F8 accounts for nearly 50% of the most serious forms of HA3,4. Nonetheless, all classes of defects result in the translation of a dysfunctional factor (F)VIII or deficiencies in the circulating level of the protein. As a consequence, the coagulation cascade does not function properly and the balance between clotting and bleeding is lost, leading to hemorrhagic diathesis.

Depending on the level of functional FVIII in circulation, the severity of the bleedings varies. Accordingly, HA patients can be classified as mild, moderate or severe (Figure 1). 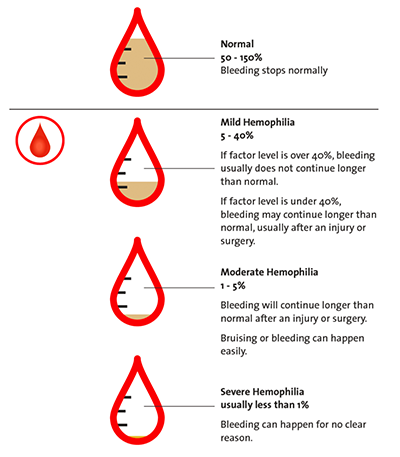 Figure 1 Visual representation of HA subtypes, classified according with the amount of functional FVIII circulating levels5./p>

In addition to the aforementioned genetic etiology of the disease, some patients develop the so-called “acquired HA (AHA)” later in life6,7. These individuals have no history of past spontaneous bleedings but present with a similar phenotype to that of congenital HA. However, congenital HA bleeding episodes are more frequent into joints, while in AHA patients they remain localized to soft tissues. All HA patients are further threatened by severe trauma, especially when localized in the brain, which could lead to intracranial hemorrhage, and by recurrent hemorrhages which result in chronic inflammations1.

AHA can be caused by autoantibodies against FVIII which inhibit its clotting function; the reasons for their insurgence remain to be fully elucidated. Loss of production of FVII due to, for instance, liver failure or vitamin K deficiency is also categorized as AHA6,7.

Overview of the existing therapies

From direct blood transfusions in 1840s, to the use of snake venoms to clot the blood of hemophilic patients in 1930s, great progresses have been made in the treatment of HA. As a matter of fact, life expectancy jumped from 13 years old at the beginning of the previous century, to living a normal life today1. One of the most important scientific advancements for the patients was the purification of functional FVIII from the plasma, which paved the way for infusions of the deficient coagulation factor8.

Nowadays, the main approach to treat the disease remains the replacement of the missing protein to achieve the physiological levels of FVIII needed to restore a balanced hemostasis. The treatment is therefore referred to as replacement or substitution therapy.

Since both the structure and the genetic sequence of FVIII are thoroughly studied, different products are available in the market, either concentrated forms of the purified clotting factor from plasma of healthy donors (pdFVIII) or recombinant FVIII produced in vitro in various mammalian cell lines.

Replacement therapies are administered both prophylactically and on-demand. The former protocol is aimed at keeping stable levels of circulating FVIII, so that to reduce the frequency of spontaneous bleedings in order to prevent joint damage. This is achieved by recurrent intravenous injections of therapeutic FVIII. The dosage, the frequency of the weekly infusions and the age at which to start prophylaxis however are not standardized9. On top of the chronic prophylactic therapies, higher dosages of FVIII still need to be administered episodically (on-demand), for example in case of major injuries or surgery10. The main threat to the success of replacement therapies is the development in ~20% of the severe HA patients of anti-FVIII antibodies, called inhibitors, that hamper the function of the therapeutic protein and therefore its ability to stop and prevent bleedings11,12.

A great deal of effort has been put into improving these therapeutic protocols, to tackle the problem of inhibitors’ development, relieve the burden on the patients and assure them a better quality of life. For instance, PEGylated forms of therapeutic FVIII or fusion protein with the fragment crystallizable of IgG or albumin show somewhat extended half-lives. This allows for a reduction in infusion frequencies10. Other approaches move away from the traditional paradigm of the substitution therapies by targeting different steps of the hemostatic pathways as opposed to giving in trans the missing clotting factor. Inhibition of anticoagulants is one of these strategies, e.g. monoclonal antibodies against tissue factor pathway inhibitor, RNA interference to silence the translation of anti-thrombin10 and specific inhibitors of activated protein C13.

Another cutting-edge technology which has recently been approved by the regulating agencies is the use of a bispecific antibody which mimics the function of FVIII in the coagulation cascade (Figure 2)14,15. Indeed, FVIII is a cofactor for FIXa. Its role in coagulation is to bridge FIXa and FX, thus promoting the FIXa-dependent activation of FX and downstream clot formation. Although showing very promising and starting to being use as prophylaxis, this strategy does not solve the problem of inhibitors’ development, because direct infusions of FVIII concentrates are still needed in case of major injury, surgery and spontaneous bleedings which could still occur16. 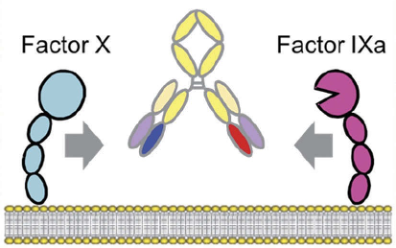 Figure 2 Schematic of the function of bispecific antibodies. Two different Fabs recognize FIX and FX and put them in closer contact to each other (Adapted from Mahlangu, J. et al., Emicizumab for the prevention of bleeds in hemophilia A14).

Exciting future perspectives in the treatment of HA include the development of gene therapies which would directly intervene at the DNA level to rescue the mutant phenotype17. Further, a number of innovative strategies to tolerize FVIII and restore its function are being investigated, such as T cell engineering, oral tolerance and the use of glycans to target specific inhibitory pathways on dendritic cells18.